We assume the camera adheres to the “pin-hole” model, where points in space project as straight lines to the camera aperture (the origin of the “scene” coordinate system) and intersect through an image plane at “image points”. This image plane is supposed to represent the ideal physical location of the image sensor, and contains a 2D projection of 3D scene points.

The diagram below describes the model: 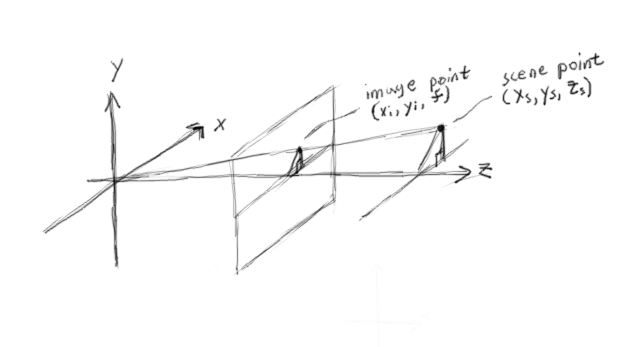 We can compute image points from scene points via:

If you delay the division by

can be recovered by:

We assume there is a simple offset and scaling relationship between

The diagram below describes this transformation: 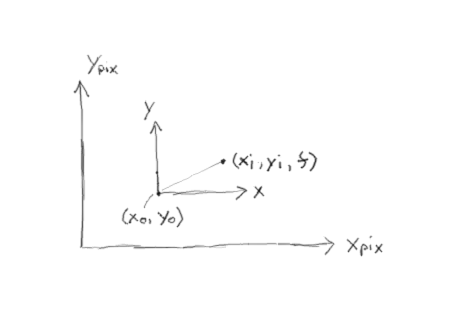 The image center accounts for the fact that the image sensor might be shifted from the optical center, and the scaling factors account for the physical size of the pixels.

Again, delaying the division of

results in a linear equation:

In an ideal world, the model would be complete and all we would need to do to characterize the camera “intrinsics” would be to find the

Two popular lens/camera distortion models are heikkila97 and wang08. In my opinion, wang08 makes more sense intuitively than heikkila97, although the overall performance of the two is about the same. Since heikkila97 is used in many toolboxes (e.g Bouguet’s toolbox), I’ll discuss that here for the sake of example.

First, we must make a distinction between distorted and undistorted coordinates:

We assume there are radial and tangential lens distortions:

The following diagram describes this model: 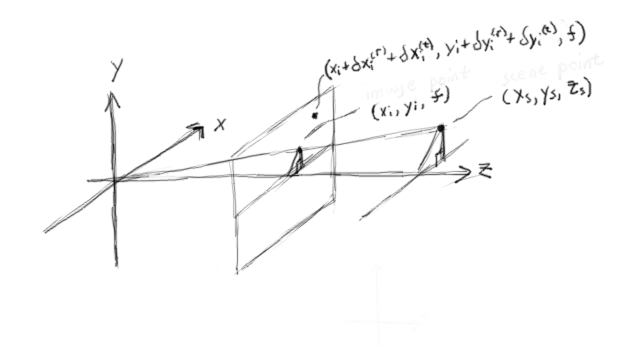 First, the transformation from world to scene coordinates is a simple rigid body translation and rotation, shown below: 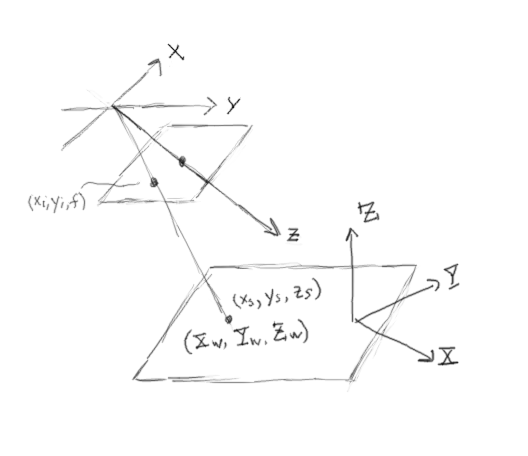 If we left-multiply both sides by

This is a linear equation which transforms world coordinates to pixel coordinates (recall:

Now, we have our entire model. In order to characterize the camera “intrinsics”, we need to compute

and the distortion coefficients. The next section describes a numerical implementation to do this.

We now have a full camera model to work with. Some things:

For this article, I’m assuming a 2D calibration board is used for calibration. The next sections explain how calibration (i.e. estimation of “intrinsic” and “extrinsic” parameters) is done for this case.

If we have two sets of points, for example a set of points on our calibration board in “world coordinates” and the corresponding set of points in pixel coordinates (i.e. we have detected and localized these points on the calibration board image), then we can approximate the transformation from these two sets of points using a homography. The assumption here is we’re using the pin-hole camera model and there is very little lens distortion.

Then, we put them in matrix form:

The solution is the eigenvector of

associated with the smallest eigenvalue. To compute it, use the SVD:

Assuming the eigenvalues are sorted in descending order, then the last column of

will contain the least eigenvector.

Note that since this is a homogeneous equation, once we solve for

, what we will actually find is

. It’s important to keep this in mind.

Also, there is a normalized version of the above which makes it more stable and accounts for the fact that (

) may have very different scales, which may make

The normalization step does two things:

A “normalization matrix” is used:

The same matrix is also constructed for the set of points in world coordinates, which we call

If we do the math to see the updated

Then, we put them in matrix form:

We can now solve for

. But, we must recover the original homography after we have computed the preconditioned homography; to recover it:

So, to use the preconditioned approach:

So now we have a linear method for computing homographies. Another refinement you can do is a nonlinear optimization of the homography using the linear method as the initial guess. This is more or less optional but included for completeness.

. Homographies have 8 degrees of freedom and this is a typical constraint added to parameterize the homography for nonlinear optimization.

Next, we derive the Jacobian so we can perform Gauss-Newton iterations (note the initial guess is typically very good and the optimization is well behaved, so in my experience more robust methods like Levenberg-Marquardt aren’t necessary).

Set the cost function to:

And you can perform Gauss-Newton updates using the pseudo inverse (although you really should use a direct linear solver):

Until some convergence condition.

Now, we have a method to determine a fully optimized homography given two sets of points.

After homographies for each image of a calibration board are computed, we need to compute an initial guess for the intrinsic parameters.

. We assume that the lens distortion parameters are zero, which is reasonable for most camera/lens combinations.

Furthermore, we assume the following:

We assume the first two things because the principle point estimation is usually difficult and unstable, so we assume it’s at the middle of the image (this also assumes the first pixel has a position of (1,1); i.e. one-based indexing). It’s also a good assumption for most cameras that

(assuming the pixels are square) and hence

. These constraints will allow us to get a better initial guess for

We arrive at the following constraint:

If you repeat the same steps for:

, you get the additional constraint:

We put these constraints into matrix form:

Then, you can solve for

and take the inverse and square root to recover

The next step is to get an initial guess of the extrinsic parameters per calibration board image.

Since we now have an initial guess for

This results in the following:

are supposed to be unit vectors:

We can then solve for the extrinsics:

But, before we do that, it makes things easier to parameterize the camera model with “normalized” coordinates.

Doing the same for

Now, take the partial derivatives of

Do the same for

Now we must find

But, before we can do that, we must parameterize rotation. For that, I’ve elected to use Euler angles; I specify a X-Y-Z rotation sequence:

Note that the inverse is:

We take the Jacobian:

Now, we can compute the full Jacobian:

We can now define our cost function for single camera calibration:

We put all of our parameters (intrinsic + extrinsic) in a single vector,

Which results in 8+6M total parameters.

To solve this, I’d recommend using the Levenberg-Marquardt method since the nonlinear optimization is not well-behaved under certain circumstances (In my tests, if very few calibration boards are provided, it can cause the Gauss-Newton method to fail):

As usual, it’s recommended to use a sparse linear solver instead of directly taking the inverse.

We now have enough information to fully calibrate and optimize a camera using a calibration board.

The first thing we need to consider is how to incorporate two cameras into the model. We do this by simply adding the transformation between the two cameras as follows: 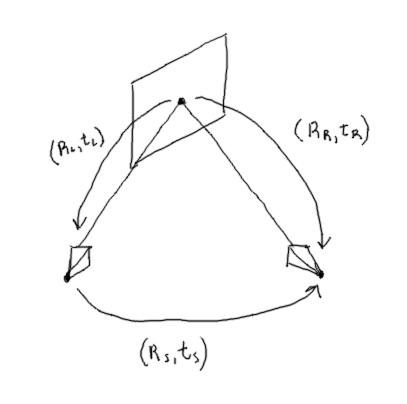 We can solve for

In order to optimize the stereo model, we do the following:

We now have a model for stereo vision and a way to provide an initial guess for this model.

have the same form as single camera calibration.

have the same form as single camera calibration.

are new quantities that we need to derive.

We need to compute the Jacobians:

The only quantities we haven’t derived yet are:

The rest of the Jacobians have already been derived in the single camera calibration section.

We put all of our parameters (intrinsic + extrinsic) in a single vector,

Which results in 22+6M total parameters.

To solve this, again, I’d recommend using the Levenberg-Marquardt method since it is not well-behaved under certain circumstances:

Until some convergence condition.